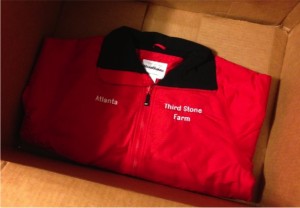 My new red jacket eagerly awaits its debut on Saturday.

There are many firsts behind us, and many more ahead of us  — including our first selling weekend happening this Saturday.  We are all very excited for that.

But beyond the summer adventures and the fall chores at the farm, we were thrilled when our new Third Stone Farm red jackets recently arrived in the mail.  There was something about seeing the jackets embroidered with the name of the farm on one side and our names on the other that made our ownership of Third Stone Farm become even more official than it already was.

Mike, Rich and Karlene started the tradition of having farm staff greet customers in bright red jackets.  We considered getting a different color jacket but the red made sense in terms of being visible at the farm on gray December days.  We also liked continuing the tradition.

As I waited for our jackets to arrive, I found myself thinking, however far afield it may be, of how our predecessors in the town of Barnstead Parade, almost 239 years ago, were anticipating the arrival of a very different kind of red coat.  On the day that I first met Karlene, she told me that Barnstead Parade is one of only five New Hampshire towns that has the distinction of having Parade in its name.  The name honors the local militia who would parade around the town square as they trained and prepared to fight for the independence of this country.

There is a history to the farm and there is a history to the town of Barnstead Parade .  The histories are different but they are tied together through the land that they share.  I am grateful that our family’s history is now becoming a part of the mix and I look forward to having all of us at the farm, over the coming three weekends, united by our red outerwear and our histories that are now intertwined.

View all posts by: Atlanta McIlwraith