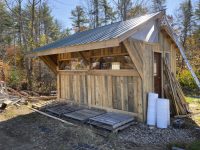 In 2019, I finally got to work on our long anticipated sugar shack so that we could boil sap under cover & out of the wind. During the early spring, I cut down white pine trees that had been blown over or broken during the last two winters. With Chris’ help for a week in May, we sawed logs into the timbers and used the scraps to make siding. I let the lumber dry over the summer and got to chiseling my mortices and tenons in September. It took about a couple of weeks to get the timbers ready for assembly with a goal of getting the frame up and a roof on before winter.

Bill & I got to boil our sap under cover but without walls during the 2020 sugaring season. Later that summer, I got around to adding windows, doors and siding. I especially like my sliding doors at the firewood pile. During the 2021 season, we were boiling in style, warm and dry. There’s still a few things to yet to finish including a French door for the sun side and a couple of special windows, but it’s getting close to completion.