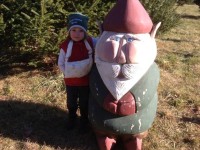 This is a guest post from my Mom, Marlene Hurley.

Here we are, first day on the Farm…Third Stone Farm, that is.  Just a few days ago it was Thanksgiving and you could see the excitement and anticipation in my children as we drew closer to our first Opening Day.  As Bill, Kenzie and I arrived we were presented with our red Third Stone Farm jackets and green hats that designated us as official Christmas Tree people.

Rich and Karlene were ready to pass the torch to Tim and Atlanta.  Rich, Karlene  and Mike have poured their hearts and souls into building a family tradition for so many people in the Barnstead area.  Rich and Karlene set about instructing us painstakingly on how to set up and take over their business of making tradition  happen.  The tree limos were lined up, the pots were simmering with cider and hot chocolate, cookies were out and we were ready.  This all happened after I finished struggling with all those bows that had to be attached to the  Christmas  wreaths…first lesson learned, frozen fingers do not work well…hurry and put those gloves back on.

Bill and Tim got a lesson in tree netting…second lesson learned, BIG trees do not fit through the netting equipment.  Just ask Bill as he fell to the ground while 5 men pulled  and pulled on that fat tree that just didn’t want to cooperate.  Rick, Tim’s Dad, arrived to pitch in and soon became a pro.  People started arriving arriving early for their trek out to the fields, everyone in good cheer. There were families with babies only a few weeks old..all bundled up, ready to go.  I never saw so many unique Christmas hats in my life…there were hats that lit up, hats that moved, hats that jingled, but the best were the two rather good size dogs that came dressed in Santa suits.  Oh yes, did I mention the two barn cats that adopted our family for the weekend…they were kittens really.  They were the big hit of the day as everyone wanted to take them home.

Next came Willow and Kenzie as they took up their positions as tree limo valets.  Two little kids never worked so hard to get on Santa’s good list.  Lou arrived on Sunday and was a welcome addition.  Photos were taken, hot drinks served and new families to greet, candy canes for Willow to give out to those who found Elfie, but at the end of this wonderfully successful weekend, there were 6 very tired, happy people of my family that could proudly say We Did It.  Rich, Karlene and Mike have passed the torch.  Tim, Atlanta and Willow are now the THIRD STONE FARM family.