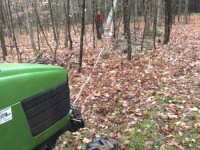 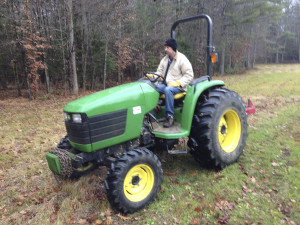 After spending some time with Rich to explore the forest, I ventured out on my now this past weekend.  It had seemed that there were so many obvious trees to take for firewood when I was with Rich, but on my own, I lost all my confidence. It seemed all I could find that appeared large enough to be useful, was also worth keeping for one reason or another.  In particular, I’m hesitant to take down any red maples just yet.  Until I get through a season sugaring here, it’s hard to tell how it will all work out & we have done really well making syrup from red maples all along, so I just hate to forgo that sap for firewood.

Lou & Bill were soon to arrive to help me cut  and split the wood, so I was starting to feel some pressure to get going, lest they end up standing around.  Since it’s such a luxury to  have the extra hands, I didn’t want to squander the time.  So I decided on an ash and a poplar.  Lou & I managed to squeeze almost 1/2 cord of wood out of that one tree.   Felling the poplar didn’t work out just as
planned though… I missed my window through the trees by a couple of feet and it got hung up with no intention of budging.  After trying to cut it out, we ultimately decided to hook a chain and try to pull it down with the tractor.  Of course there were competing opinions as to the direction to pull it, but we had quite a load of fun playing around. Horsepower, spinning tires, mud, and big, crashing trees sure make an afternoon!

And, to top the afternoon, we had a little campfire, a little beer, and a plateful of Atlanta’s homemade twinkies. 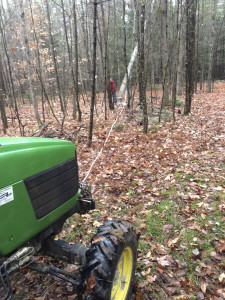 Pulling on the poplar 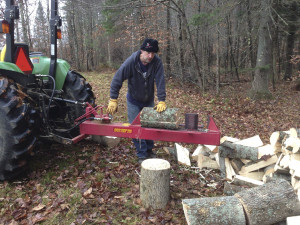 One of the things that makes this splitter so awesome is it’s adjustable height!